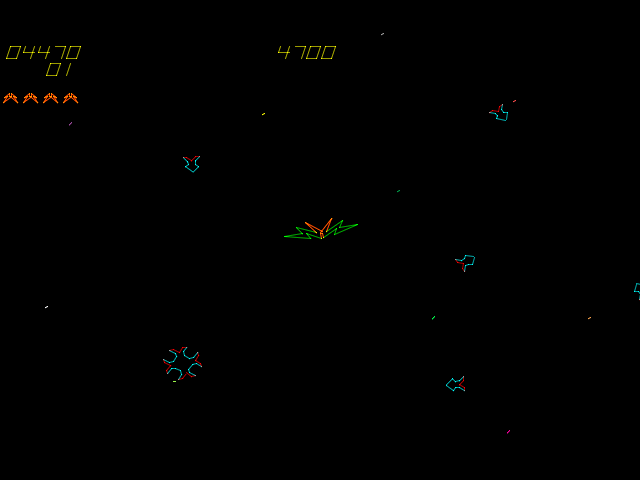 Space Fury (J:スペースフューリー) is a multi-directional shooter arcade game created by Sega and released on June 17, 1981. The game was an early example of color vector graphics and it also featured speech synthesis. Gameplay The player controls a spaceship battling alien spacecraft. Like other early similar arcade games, it is controlled by four buttons: rotate left, rotate right, thrust and fire. The game was particularly unique in that the player could choose different upgrades for the first three levels. One upgrade would allow the player to shoot in a three-way pattern, another would allow the player to fire forward and backwards, and the third would allow all the firepower to be concentrated in the front. At the conclusion of the following round, the player would then pick up another shell, although multiple ones could not be used together. The different firing patterns made each round seem slightly different. Between rounds and during the attract mode, the alien commander would taunt the player through the use of synthesized speech. The game continues indefinitely but stops calculating the score after the completion of level four. At the beginning of each level a synthesized excerpt from Aaron Copland's Fanfare for the Common Man is heard.

"So! A creature for my amusement! Prepare for Battle!" These are the words uttered by the alien commander upon starting a game of Space Fury. The gameplay is similiar to Asteroids in that you have one screen of space that wraps back on itself and your ship can only thrust and fire. However, whereas in Asteroids you faced pieces of rock that couldn't give chase, Space Fury instead provides alien vessels that will hunt you down. Each alien vessel starts in 4 pieces at diagonal corners which will try to join together. Shooting any of these pieces before is possible and will make things easier for your player. When one or more pieces reaches the center point, it combines with other pieces there and begins to fire upon and give chase to your vessel. There's only one screen of space, so your tactics are limited. However your vessel is not completely basic. Provided from the beginning are three superstructures, of which you can choose one, that provide additional firepower to your ship.